Persian Gardens are gardens with a particular architecture, and elements such as geometric structures, water and trees, and the medieval building, mostly built on the Iranian plateau and its periphery. The three unique structures and designs distinguish Iranian garden from other gardens: located on the waterway, surrounded by long walls, have a summer mansion and a water pool.

Pasargadae Persian Garden, is a section of the Pasargadae World Collection referred to as the Origin of Persian Gardens and the Early Gardening Pattern of Iran. Based on historical evidences, Cyrus the Great described how to make the gardens, and even how to arrange the trees. This gardens also had large buildings and other small gardens, and many see it as a “garden in the garden.”

Today, nothing remains of the ancient beauty of this garden, but evidence and discoveries show that the garden has two mansions, various trees, colorful flowers as well as numerous birds; elements that Cyrus, the great designed with his own taste.

The water needed for the royal garden was provided through the branches of the Pulvar River. One of the interesting points of this garden is its water circulation system in rocky land. Visit Persian Gardens

In a corner of the northwest of Shiraz, the beautiful gardens show that during years, the cold and warm weather has been kept alive. Despite numerous studies and researches, there is still no information from the date of construction and the founder of the Garden of Eram in Shiraz; however, the presence of this garden in 10th and 11th centuries travelogues indicates its existence until then. In each period, despite changes in the garden, its space has been increased and decreased. Today its size is about 110,380 square meters.

A large pool, water circulation and the greenery of the trees are only part of the attraction of this garden.

There are columns on the upper floors of the mansion that has been inspired by the Persepolis to recall its beauty and magnificence. Pictures of Naser-al-Din Shah Qajar, stories from Ferdowsi and Shahnameh or Epic of Kings, Suleiman and Queen Saba, Rostam, Khosrow Shirin, Yusuf and Zulikha, and ancient Persian literature and religious stories, are some paintings that you can see on the building. Visit Persian Gardens

The Prince Garden or Shazdeh Garden is a green place in the city of Mahan, Kerman province, which shines like a green oasis in the middle of desert. The history of the spectacular Shazdeh garden dates back to Qajar era and it was built on the orders of Mohammad Hassan Khan, Sardar Iravani, the ruler of Kerman. Water in the prince’s garden comes from the Qanat and the Tigran River, which originates from the snowy mountains of Mount Jupar. This water comes from the highest part of the garden, and flows through the amazing distribution and irrigation system to water diverse and uplifting trees.

This garden is such an attractions you cannot miss. The courtyard, the mansion, the pool and the beautiful streams that look alike small waterfalls have given a special atmosphere to this place. In addition to its historical background, the garden is also eye-catching. People come together for a various occasions such as the New Year and spend some time there. Visit Persian Gardens

4- Chehelsotun Garden | A Gem In Isfahan

When people hear the name of Chehelston, everyone remembers the building with majestic pillars and imagine the palace in mind, but the garden inside which Chehelsoton mansion is built is much worthy as its name appears on the UNESCO World Heritage List. Chehelsotun Garden is a wisely-built garden with beautiful aisles and water circulation system. Its nice mansion which is now a museum attracts the attention of its visitors. There is a large pool in the garden and the reflection of mansion image makes such a unique opportunity for photography. Sculptures placed around the pool are another interesting part of this garden. Visit Persian Gardens

Fin Garden or the Garden of Shah located in Kashan is a green and beautiful area. Fin Garden, inside its high walls, is completely separated from the city’s atmosphere. The presence of aqueducts and karizes provides the needed water of this garden.

The garden is 33700 square meters, covered by the barrow and cylindrical towers where the residents were in complete safety against the rain. The size, shape and height of the building also reflected the glory and majesty of its royalty. The murder of Amir Kabir – Iran’s Chancellor – the most important event in Iran’s history, has taken place in the bath of this garden adding to its reputation.

There are about 579 cypress and 11 arboreal trees in the garden, most of which are between 100 and 470 years old. Beautiful pools and fountains along with the eye-catching buildings created such a relaxing atmosphere allows you to enjoy the natural beauties when relaxing.

A striking features of this garden is the pond in which people throw coins and believe their wishes will be fulfilled. The philosophy of dropping a coin in water returns to the ritual of Mitra in the Zarathustra religion. In this ritual, water is a symbol of purity, so one has to give a part of wealth to the goddess and takes blessings instead. Visit Persian Gardens 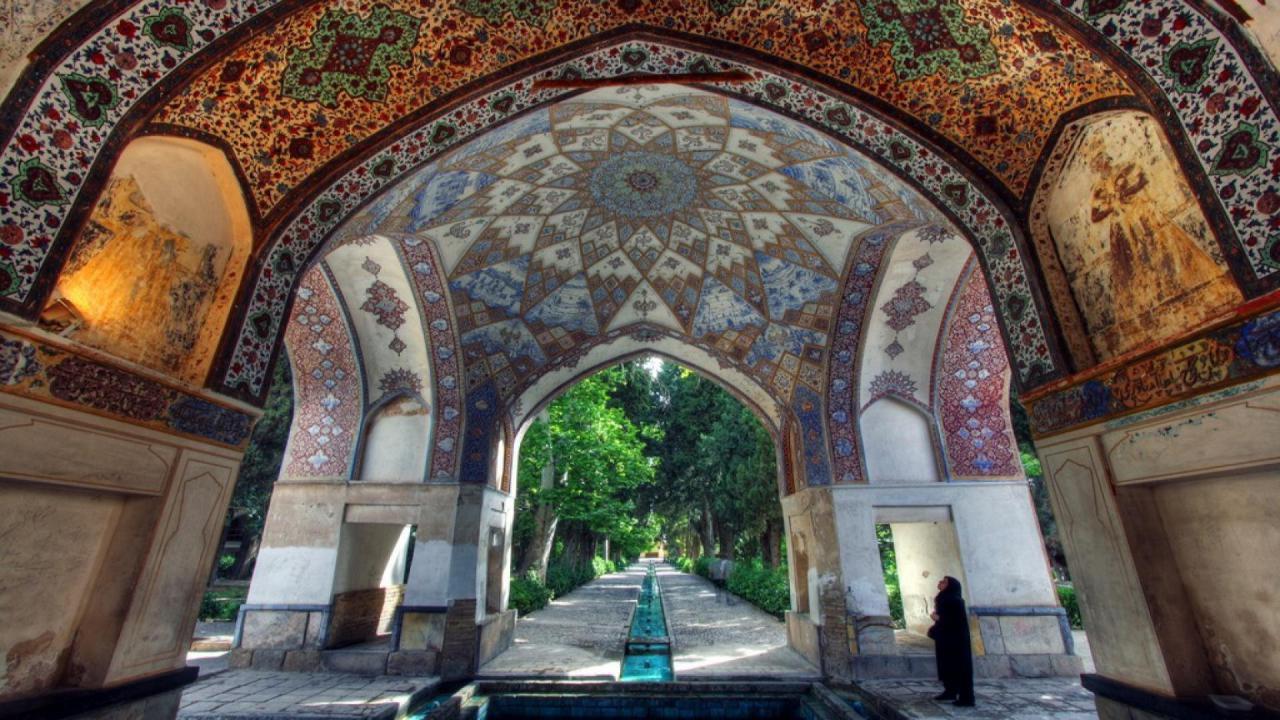 Abbas Abad Historical Complex or Abbas Abad Garden is a beautiful space in Alborz Mountains, which is considered to be the most important non-desert garden in Iran. This valuable collection was built by Shah Abbas I in 1020 and 1021 AH and now it reaches 500 hectares. The  garden of Abbas Abad is located on a natural hill. The Safavid Engineers created its stairs and platforms by cutting down the hill, and then they built a three-storey garden with a beautiful mansion at its highest point.

The mansion, observation towers, north and south plains, dam and the water flow control tower, the pottery workshops and are interesting parts of this garden. Visit Persian Gardens

Doulat Abad Garden, was built at the end of the Afshari period, is considered as one of the most beautiful gardens in Iran. The garden has four main buildings. Several parts of this garden have destroyed over years, and today only 40,000 square meters of it remains. Doulat Abad Garden has two distinct sections at the moment.

A main reasons for its reputation is the tall wind-tower known as the world’s tallest wind-tower. This wind-tower is located above the entrance hall (summer mansion) direct the desert breeze into the building. In this garden like other Persian gardens, water plays an important role; the water was provided by the Doulat Abad historical aqueduct. This aqueduct is one of the most important and longest aqueducts in the city of Yazd, which has five fields and originates from Mehriz highlands. Visit Persian Gardens

The Akbarieh Garden, located in the city of Birjand, is another Persian garden with an area of ​​45,000 square meters. Historical evidence suggests that Akbarieh gardens and mansion was started to be constructed during the late Zandiyeh or early Qajar era, and finished during the Qajar era. This garden is located in a mountain bed and covered by the adobe walls from three sides.

The architectural of this garden is Persian, but inspirations comes from the Russian architecture integrated with the Islamic architecture, all created a modern architecture. The spaces in this garden include the Heshmat al-Mulk mansion, the central mansion and the service spaces. There are also museums inside the garden displaying the history and culture of this part of Iran. These museums include: Birjand Archaeological Museum, Birjand Museum of Anthropology, Doll Museum and Khorasan Culture Museum. Visit Persian Gardens

9- Pahlavan Pour Mehriz Garden | A Relic Of The Qajar Era

Due to the flowing of water inside it, Pahlavan Pour was an attractive garden from the late Qajar period. Most of the water in the garden is directly provided by Hasaabad Qanat, and this water, except to the Pahlavan Pour, does not directly go to any of the gardens in the area. Shah Hoseini Qanat is another sources of water supply.

The old trees are one of the attractions of this garden, locating on two sides of the main garden. Pomegranate, almonds and persimmons are the fruit trees of this garden that give a special character to this place.

In terms of architecture, many experts believe that Pahlavan Pour Garden shows the progress of ancient Iranian gardening into the present-day gardening that has of particular importance in this regard.

It is interesting to know that the entrance of this garden is decorated with Zand period style, but its construction dates back to the Qajar era. Visit Persian Gardens