Flandin was in Iran in 1841 while taking part in a French diplomatic mission. He and his fellow artist Pascal Coste were employed to record Persia’s ancient and Islamic monuments, and after their return to France they published jointly eight volumes of text and plates entitled ‘Voyage en Perse’ 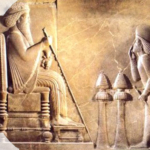